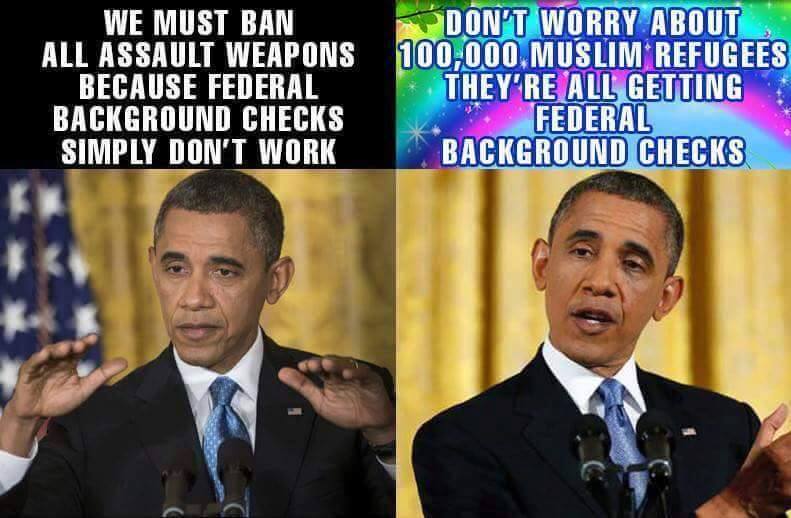 One might get the impression that roughly half of Democrats dismiss firearm confiscation concerns as wild, baseless “conspiracy theory,” while the other openly and actively advocates for the violence of a nationwide door to door gun grab.

It can certainly be confusing, and like most of the seemingly contradictory messages reverberated by the left, it’s meant to be.

Fortunately both of the Democrat messages on self defense rights can be readily dismissed as false.  And let’s do that now.

FALSE MESSAGE ONE: “NOBODY’S COMING FOR YOUR GUNS”

It’s not uncommon for liberals to conflate “hasn’t happened yet” with “cannot happen.”  Faulty logic is a way of life for those making and passing along liberal “arguments.”

As for the notion that “Obama hasn’t come for anyones guns” that is demonstrably false. Most good lies have a grain of truth, and in this case that grain exploits the good fortune that Obama was not successful with 100% of his anti-American and anti-2nd-Amendment efforts.

It’s been no secret that his every action and every speech compelled Americans to rethink their right to self defense as secondary to the false sense of “safety” that might be momentarily realized until Americans are caught helpless in any of countless gun-free zones.

Obama was behind several open measures to significantly restrict and even eliminate private gun ownerships while also working on at least  a few covert operations such as “Fast ‘n Furious.”  And of course Obama’s not working the NWO angle by his lonesome.

Disgraced former California Senator Leland Yee might be dismissed otherwise as “the exception” but his own exposed plot to remove guns from the good while actively putting high power weapons in the hands of the bad is only different from “business as usual” in that he was caught red handed.

It should also be considered interesting that his State of California, a State known for the most draconian and restrictive gun prohibitions, has recently relaxed penalties for criminals using guns to commit crimes.

In addition to turning every speaking opportunity to can open call for new gun right infringements, Obama waged his own war against 2nd Amendment on multiple fronts

He took every of countless mass shooting events to take attention away from the perp and onto the weapons.  And of course there were so many to choose from in the horrible years of #OBAMANATION.

Fort Hood was made possible by poorly assimilated Moslem invasion and absurd new “gun free zone” policies within the military.  But of course Obama’s magic word games informed the American public that it “Wasn’t terrorism” but was “workplace violence.”

Whereas it’s already known that Fast ‘n Furious was an operation designed to kill Americans to create fear of “the guns” it’s not so easy to tell with other events.  The late Bill Cooper who tipped us off to 911 a few months in advance before he was murdered by government on his own property shared some insight in his much earlier writings:

Whereas professional jobs are by design hard to unravel, we’d be foolish not to wonder which of the 90% Mass Shooting events performed by big-bank connected liberals are simple accidents and which might fit the Manchurian Candidate model.

It bears worthy of mention that Democrats already have performed gun grabs.  Waco, Ruby Ridge are two well known examples, but there are countless stories where ATF and other agencies have made confiscations over flimsy arguments concerning compliance of increasingly complicated set of laws and restrictions.

What’s more is there has already been door-to-door firearms grabs as performed by military as part of a test that exploited the emergency situation that started with Hurricane Katrina.

FALSE MESSAGE TWO: “SOMEBODY SHOULD COME FOR YOUR GUNS”

There are numorous examples of Democrats like Feinstein openly stating that, if she had “enough support” she would absolutely advocate door-to-door confiscation of all privately owned handguns along with any of whatever might be branded “assault weapons.”

The passion of Democrats is as directed by Hollywood propaganda as it’s reflected in it.

Here we have the archetype of the Democrats’ ideal for “An American President” in the Clinton-favor film of the same name:

The Clintons had never done much to differentiate themselves.  I challenge you to find a single clip of either of them, or any other Democrat President or major Presidential Candidate making statement materially different from the above example of “the ideal Democrat.”

Now certainly not all Democrats are opposed to their own personal ownership of whatever sort of weapons they please.  I know indirectly of countless liberals that have impressive collections of their own while loudly advocating for the lesser people to be stripped of all privately held guns.

This hypocrisy could be discussed in detail, but I rather doubt anyone reading this would find Democrat Double Standards to be anything but ordinary.

WHY PRIVATE FIRARM OWNERSHIP IS AN ESSENTIAL HUMAN RIGHT.

Any genuine interest in individual sovereignty and a life worth living should be accompanied by the understanding that every last drop of both are strictly connected to the individual’s right to personally participate in their own defense.

The 2nd Amendment is not the source of our right of self defense, but the underlying preexisting right is most certainly mentioned within the clear and simple language therein.

Gun grab advocates incessantly whine about so-called “gun violence’ as the ultimate deflection from the only statistic that really  has anything to do with an individual’s ability to live in safety.  Those are murder, assault and rape rates.

For each case of “gun violence” there are countless more cases of “gun non violence” that doesn’t get reported.  These include attempted murder, rape and robbery that’s stopped by the mere presentation of a weapon by a would-be-victim.  These also include countless that never happen as result of the possibility that a would-be-victim might possess one or more weapons that might be accessed to carry out their own real-time response to such threats.

“Could have happened” cases are harder to report in statistics that are easy enough for the liberal mind to comprehend, but R. J. Lott did a brilliant study that makes the case.  And there’s a much easier to follow presentation that takes only a few moments to watch on Youtube.  This one in particular was so upsetting to the RawStory team of liars, that they scrubbed my link and comments and then blocked me within just 30 seconds of my posting in the comments to their own anti-2nd-Amendment article.

Now that we’ve demonstrate an inverse relationship between murder rate and the rights of individuals to perform real-time defense of their right to live we can conclude that #GUNRIGHTS save lives.

The 200 million souls that perished as a result of gun grabbing and in the past century alone serve as example of the fact that a lack of #GUNRIGHTS cost lives.

The following was REMOVED by Youtube, so an alternate link posting of this important documentary is now being presented.  A local copy has been downloaded incase they expand their censorship to catch this one:

It should be clear that gun control is not motivated by “safety” of any but those who want to leverage better control over others with their own guns.

Liberal cognitive dissonance is essential to maintaining the wildly false understanding that a successful campaign in the realm of gun control makes us “safer.”

Obviously those hatching gun grab plots can count on plenty of cognitive dissonance along with simple ignorance with their ground troops of useful idiots.  And so the Democrats will continue to call for gun grab from one side of their mouths while delivering sarcastic “nobody’s coming for your guns?” rhetoric from the other.

Meet ANOTHER “nobody…”  #BETACUCK “Beto O’Rourke”

One thought on “Democrats’ Duplicitous Messaging on Gun Control”