A 2014 documentary sheds light on the NWO agenda and how Putin has become a traitor to the Global Cabal.  We queued it up to the most relevant part that begins with Putin’s defiant turn against the NWO plot.

Putin and Russia are now our ally in the fight against Obama, McCain and Hillary’s ISIS.  But while tots are raped, men and women are burned alive in cages, and beheadings continue, all #MEDIAJIHAD attention has American eyes on Russia!

Meanwhile the mind numb #RESISTANCE drones act as though the Cold War never ended and that while it’s cool for Obama to provide Iran with 10 warheads worth of nuclear materials, and to stroke a $245 million check to Pakistan, we should be focused entirely on some imagined threat from Putin and Russia.

It’s reported that Putin even kicked the Rothschilds out of Russia, and has shut down various Soros businesses that once dominated the post-Soviet-collapse landscape in his homeland, so it’s no wonder that Soros’ pick Hillary was planning to land in the White House as commander in chief of a new Hot War with Russia!

Nobody should trust this Democrat General for anything, but obviously he had some good inside information on the vile plans of the #GLOBALCABAL when he went on this speaking tour:

And of course we don’t want to bring up Ted Kennedy’s shady deals with Russia that directly betrayed US interests. 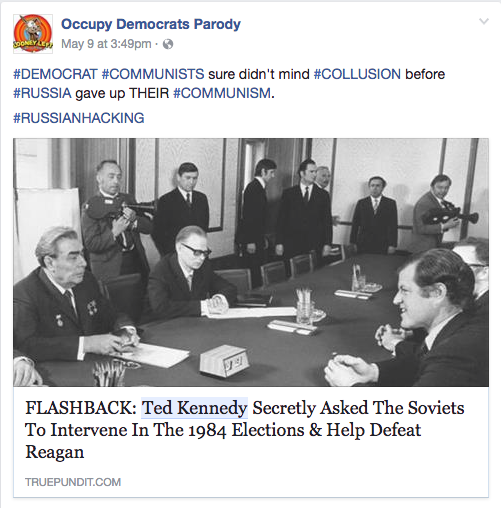 The liberals only lost their love affair with Russia when they 1. Gave up Communism, 2. Kicked the Elder Soros of their #MOVEONCULT out of Russia, and 3. Putin exposed Hillary and Obama as the founders and primary directors of ISIS.

Democrats need to keep the focus on their latest #DEMOCRATPLAYBOOK tactic of Sedition under the branding of #RESIST!