A quick timeline summation has been making the rounds on FaceBook which reads:

TIMELINE :
BREAKING!!!
What we know now:
1, The Intelligence Community -at the direction of President Obama- made a request to a FISA court for the NSA to spy on Donald Trump in June 2016. It was denied.
2, In October the Intelligence Community (NSA) -at the direction of President Obama- made a second request to the FISA court for the NSA to spy on Donald Trump. It was approved.
3. At around the same time (October), as the second request to FISA, (Def Sec) Ash Carter and (DNI) James Clapper tell President Obama to dump NSA Director Mike Rogers.
4. A week after the election, Mike Rogers makes a trip to Trump Tower without telling his superior, James Clapper; which brings about new calls (November media leaks to WaPo) for President Obama to dump Mike Rogers.
5, According to the Executive Order rule changes DNI James Clapper signed off on December 15th.
6. General Michael Flynn spoke to the Russian Ambassador on December 29th
Dec 29th 2016 – Obama announces sanctions on Russia
7, VERY IMPORTANT January: Obama expands NSA sharing. As Michael Walsh later notes, and as the New York Times reports, the outgoing Obama administration “expanded the power of the National Security Agency to share globally intercepted personal communications with the government’s 16 other intelligence agencies before applying privacy protections.” The new powers, and reduced protections, could make it easier for intelligence on private citizens to be circulated improperly or leaked.
8. Jan 3rd 2017 – Loretta Lynch signs off on rule changes for phone taps.
9. Jan 12th 2017 – WaPo reports On Phone Calls Anonymous Intel Sources
10. Jan 15th 2017 – VP Pence appears on Face the nation.
11. Jan 20th 2017 – Inauguration
12. Jan 23rd 2017 – FBI reports nothing unlawful in content of Flynn call
13. Jan 26th 2017 – Sally Yates (acting DOJ) informs President Trump there might be a conflict between VP Pence’s stated TV version (was told by Flynn), and what Intel community communicate to Yates that Flynn actually expressed to Russia.
14, Jan 27th 2017 – White House counsel begins investigation to discrepancy.
15 January: Times report. The New York Times reports, on the eve of Inauguration Day, that several agencies — the Federal Bureau of Investigation (FBI), the Central Intelligence Agency (CIA), the National Security Agency (NSA) and the Treasury Department are monitoring several associates of the Trump campaign suspected of Russian ties.
Occam’s Razor. NSA Director Admiral Mike Rogers didn’t want to participate in the spying scheme (Clapper, Brennan, Etc.), which was the baseline for President Obama’s post presidency efforts to undermine Donald Trump and keep Trump from digging into the Obama labyrinth underlying his remaining loyalists. After the October spying operation went into effect, Rogers…..unknown loyalty was a risk to the Obama objective. 10 Days after the election Rogers travels to President-Elect Trump without notifying those who were involved in the intel scheme.
Did NSA Director Mike Rogers wait for a SCIF (Sensitive Compartmented Information Facility) to be set up in Trump Tower, and then notify the President-elect he was being monitored by President Obama?
(Thanks to Charles Warren for this post) & Greg Dugdale….. 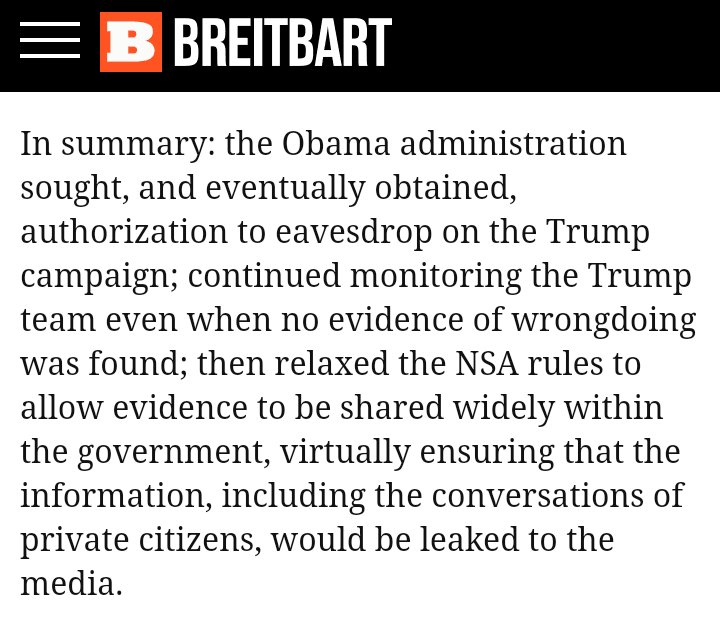 While the perps circle wagons and repeat “no proof” in a chorus of belligerence denial, the rest of us see plenty of evidence and plenty of sources aligning neatly to Trump’s claims.

Nothing can be put past Obama’s administration, countless scandals, and all that “transparent” corruption that defines his legacy.