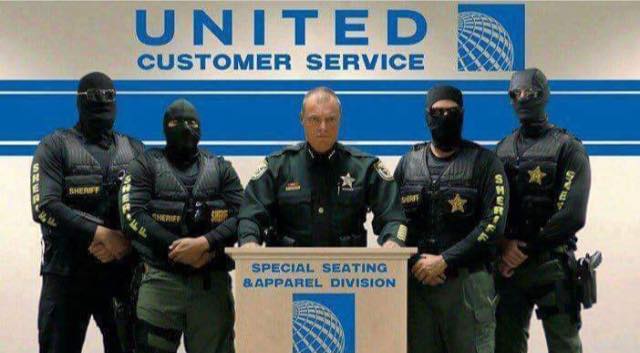 By now many have seen the horror show that unfolded on a United Airlines jetliner.

Were it not for the mighty monopoly corporations leveraging their financial might to set up regulations to suit their most wild fantasies, clients could engage with competing business operators comfortable with those old-school understandings that “the customer is always right” or at least entertain the more contemporary notions that companies had to work hard to deliver some semblance of concern for customer satisfaction.

Well, we’re not in Kansas anymore.

Here we have an example where United Airlines exploits “regulations” devised by the travel industry to afford them the opportunity to physically assault clients that might otherwise feel entitled to the seat on a flight that was paid for, confirmed and successfully boarded.

The extremely questionable airline industry practice of “overbooking” would be counted a felony if performed in most other industries.  For example, if a car dealership “overbooked” 6 families into 5 car deals, the dealer and all employees involved could literally face jail time.

Still with the help of “regulations” the airlines can sell 304 seats on a 300 flight with impunity.  It helps them keep cabins cramped to squeeze margins out of what’s become a difficult business (due to government intervention) since they can run on assumptions of a certain percentage of no-shows, and still finish off with a full flight.

But, when 100% of those 304 show up with their confirmed ride on a 300 seat jet, there’s an awkward situation that is ordinarily resolved by a little game of “Let’s make a Deal!”  Some passengers take delight in receiving a free future flight, or some other concession for stepping up to help out their air travel provider.

The airlines overbook, they pay whatever price the passengers demand to volunteer their seat.  But instead of just raising the ante until sufficient interest formed on this particular flight, they decided to try out their authority by doing their own selection of whom they think it might be fun to kick off their seat.  And when a confused passenger didn’t quite understand how he should be singled out, the “regulations” stepped in to provide the airline a means to apply unexpected and violent force to their customer.

While liberals continue to dream that “regulations” are to protect “the little guy” this unfortunate fellow learned that they are actually written by and for the big fish to 1. eliminate competition and 2. provide them unimaginable powers to oppress the people buying their product.

The practice of overbooking needs to be examined.  But at MINIMUM United Airlines should be barred from ANY overbooking for at least a period of one year until they can figure out a way to play the game without application of violent force against their customers.

Very recently I experienced my own flight from Georgia to Oakland.  The landing was aborted due to an alarm for wind sheer compelled the pilot to abort the landing.  Due to the inane and dangerous practice of fueling jets to the ounce of their destination, we were then forced to go all the way to Sacramento on our Southwest Flight to add fuel.

It is possible that the added fuel was also to provide weight to the craft to reduce the stunt factor of bringing her down across 50 MPH gusts, but it also struck me as irresponsible to place passengers and crew alike in some danger for not having plenty of extra fuel preloaded to deal with the unexpected.