Our name includes “Parody” and so we’re often asked whether we’re serious.

We are a “parody” of the brand known as “Occupy Democrats.”   Now it’s fair to say that they are a self-parody and that their own absurd comedy might be adequately entertaining in its own right.  But here we lean into a synonym, “mockery.”

Whereas we originally set out to mock and ridicule the ridiculous, we also have expanded our mission to offer a detox to all the mind rot that prevails among those cultists that literally seek ideological guidance from Occupy Democrats.

Whereas ridicule and humor are powerful tools, we certainly do take a few things seriously.  First we look at our interactions as opportunity to teach what we know and learn what we don’t.  Unlike other entities, we welcome opposing views and actively engage with those presenting challenges.

Because integrity matters, we have a “no scrub and no block” policy so that those making an investment in comments don’t experience the frustration of having everything vanish when the discussion takes an unexpected turn.

Whereas we have plenty of fun and sometimes post playful content, all of our responses and written arguments are thoughtful and serious minded.  We also have enough integrity to acknowledge any mistakes with disclaimers added to the top of any Facebook posts that are meaningfully called into question.

Our communication style is not to everyone’s taste, but you know what they say about pleasing everyone.  We have resolved to, as we describe it, “argue the whole triangle” while many of those that attempt challenges wallow at what we call “bottom triangle.” 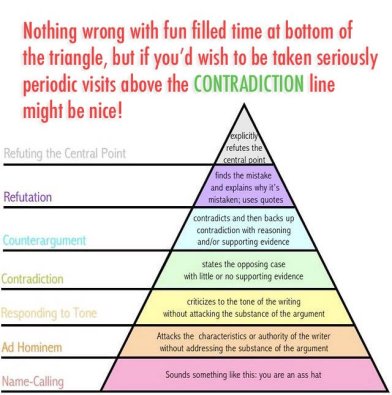 Either way, the views expressed by ODP are best described as sincere tentative positions that can be moved by persuasive arguments.  And we’re all about the debate.

The Eastern view of debate describes the person proven wrong as “the winner” since it is presumed that they gained the most from the exchange.  We often have to settle for the consolation prize of being proven right, but even that “failing” lends to a superior understanding of the position successfully defended.

Many see “debate” as just “a fight” and believe one or both parties lose.  We firmly assert that “there are no bad debates.”  And in every one, both parties win something.

Our audience on Twitter (presently 800) and Facebook (presently just under 31,000) seems to appreciate our integrity, positions and the discussions we host.  And we enjoy a 4 star rating on FB in spite of plenty of drive-by 1 star reviews contributed by those that would rather not defend their positions and simply don’t enjoy the viewpoints presented and defended by ODP.