Today many confuse the violence of false imprisonment and assault of random strangers with “protesting” and even “free speech.”  It is clear that some believe they have some “rights” to take some portion of an individual’s finite hours on this Earth with impunity as long as they believe it’s to communicate some “point.”

In reality the action of blocking a freeway is “terrorism” under existing federal law.  What’s more is that the street Marxists tactic of robbing access to whatever destination is actually an act of MURDER even before the first ambulance is blocked from delivering a patient to an urgently needed hospital care, or it causes someone to miss their place on a vital organ transplant that may be on the other side of whichever terror group’s “protest.” 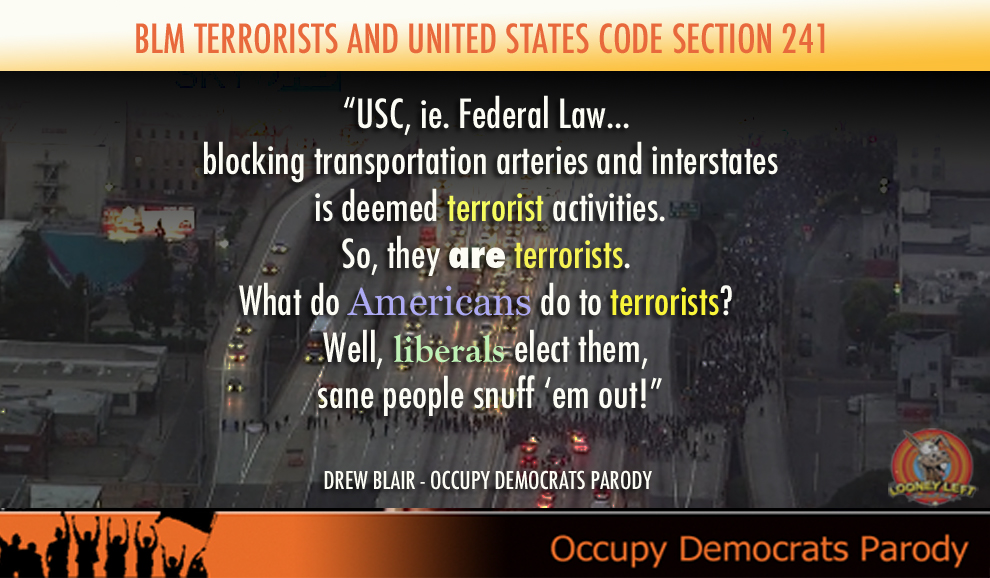 Most of the street Marxists should be able to understand collectivist concepts well enough.  And so we’ll run through a little math that even a Common Core student might be able to grasp.

If a corridor that carries 250,000 drivers from where they left to where they are going is blocked in a way that slows them by as little as 3 hours they’ll never recover, the math works out to 750,000 hours collectively lost.  That’s about 85 years or a whole human life that’s lost in the process.   And for this reason, any responsible DA should consider chargers of manslaughter if not murder for any “protest” resulting in such a loss of those precious few hours we each count as our lives.

Whether their actions of what amount to death by a thousand cuts result in the death of one human life, or whether the cuts are evenly dispersed to 1000 victims, it amounts to the same crime.

Well now that we’ve established the severity of the road-blocking terrorists’ crime, let’s talk about the appropriate response.

To date these vile street Marxists have been coddled and babied by any would-be prosecutors over the lie that it’s “their right” to “protest.”  And obviously an absence of justice serves to encourage expansion of the criminal conduct to offer more innocent victims to the collective blood sacrifice.  A vacuum of justice also tends to attract disenfranchised individuals to pick up the slack with their own individual responses to such an attack.

Many questionable YouTubes showcase these frightened or enraged individuals taking the matter of behavioral correction and/or personal survival up with their own hands and right foot.  Of course it is quite unfortunate when whatever combination of fear for safety and civic responsibility delivers one or more domestic terrorists to hospital or morgue.

Still, most of us remember dear old Reginald when he elected to stop his perfectly capable vehicle to see what might happen.  And whereas hindsight is 20/20 it’s certainly clear enough he made an incorrect choice.

So it might be argued that in addition to performing an essential civic duty, those resolved to find their way clear of a grave threat of danger to themselves and whomever might be passengers sharing their ride, are making an important decision concerning the safety and even survival of themselves along with any passengers trusting them to practice safe driving habits. 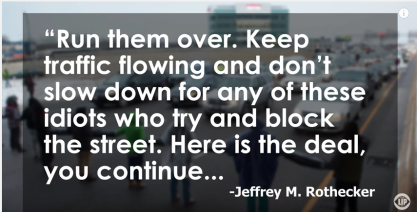 And or course for the talking head #LIBTWITS featured in the inane #FAKENEWS presentation above,  it’s “racist” to even suggest a driver might put their family’s safety ahead of imagined “rights” of #FREEWAYBLOCKERS.

We cannot make our own specific recommendations here, but we will firmly remind our readers that there are no “rights” to trap you nor your loved ones in a car.  Road blockers are actively performing violence that amounts to Domestic Terror, and thanks to #MAGA new laws are being moved forward that will offer drivers forced to make difficult decisions legal protection from inane claims that might be made by real-life “Frogger” champions and/or by surviving family members.