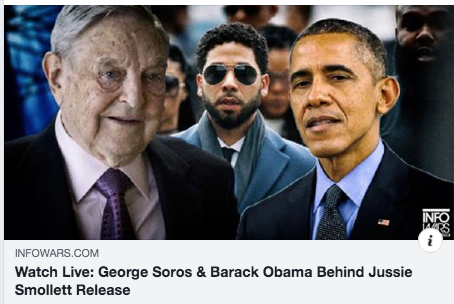 The unprecedented actions of Kim Fox might appear a matter of simple corruption and partisan politics on the surface. It doesn’t take much “scratching beneath the surface” to see her actions might make a lot of sense.

Disgraced actor Jussie Smollett is now being portrayed as a “lone wolf” in his little game of defamation of Trump, all of his “racist” and “white” supporters, that was tightly connected to his blood relative Kamala’s big plans to bring an absurd “Anti Lynching Bill” to the House and Senate to further exacerbate the very racial tensions Democrats have arranged to set off a tinder block and erupt Chicago as an epicenter of the very violence they need to “crack down” with iron fists upon all of every American’s liberties.

Whereas some conservatives are surprised to find themselves appreciative of the hard line leftist Mayor Rahm Emmanuel’s fiery response to what he righteously calls a “White Wash,” most miss that he’s also selling the absurd notion that Smollett’s motive was a simple case of a struggling actor contriving a hoax to negotiate better salary in his other acting career. This appears to provide cover for the “Executive Producers” behind Smollett’s latest act.

Only the most simple minded buy that this is just a case of Hollywood Liberal “privilege.” Democrats need their hoaxers, and they clearly have their backs. The wildly absurd added insult to injury against the Chicago Police of ordering all the fruits of their many hours to be relegated to sealed records could only be a matter of stopping any additional digging to protect bigger fish.

Kim Fox already stinks from taking some $408,000 in contributions from the insidious modern day Dr. Evil, aka George Soros. And it’s no secret that while the very fine Chicago Police were doing their best to sort things out, she was actively trying to move the case away from them and to the Democrat Infested FBI where the “investigation” could be run under their control.

And rumors of involvement by a Michelle Obama aid in the obstruction of justice against Smollett making things even more interesting.

Obviously there is more to learn, and fortunately the Chicago PD is now pressing to investigate the obvious cover-up. What we know for certain, is if Smollett was recruited as an actor to perform this big hoax for any of the corrupt Democrats, they couldn’t afford to see justice happen in his case. If he got meaningfully punished, they’ll have that much harder a time recruiting new hoaxers. And if he weren’t kept happy, he’d also be much more likely to start singing. And if they had him eliminated, recruitment for future hoaxes would become all that more complicated.

We already knew that, Smollett was just one of many hoaxes that have been uncovered. It’s also a given that for each of those that are exposed countless more go largely undetected.

With the recent conclusion of the Russian Hoax, it’s becoming increasingly clear that without hoaxes, Democrats have no show. Without double standards, they would have no standards at all. And without lies, Democrats would be mute.

2 thoughts on “Party of Hoaxers: How The Smollett Coverup Exposes His Act as Part of a Larger Production”