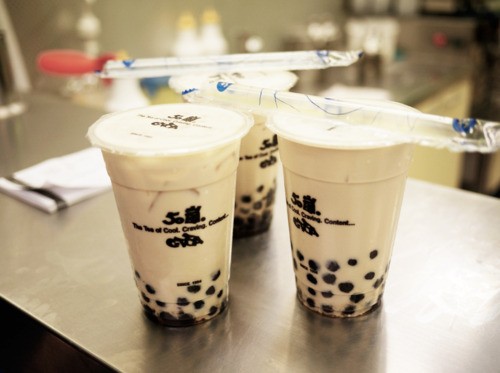 Just visited my favorite pearl tea place. I absolutely love their jasmine milk tea with pearls (tapioca balls) and grass jelly. I order it at zero percent sweet and 50% Ice in accordance to their menu of options. I find the slight sweetness from the tapioca and grass jelly more than adequate, and many of these places only have high sugar options which make the drink about as appealing as sucking down pancake syrup from a bottle.

I was concerned that their new business may be suffering from all the Corona Virus concerns that dominate most every aspect of today’s life. So I thought I’d press on against my slight reluctance that a vile liar like Ocasio Cortez might call “racism.” And so I ventured out. I had previously shared with my daughter one drink for the nearly $6 price tag, but had recently stopped sharing food with kids and family to embrace an old fashioned practice that guided the habits of parents and grandparents.

So today I arrived. Business did indeed appear to be slow but the shop was not quite as empty as the favorite Chinese restaurant where I had ordered a delicious takeout meal just a few days prior.

I noticed my friend, the proud owner of this recently launched and formerly booming business was wearing a face mask. I had heard that wearing a mask generally does not help prevent catching, but is a good measure to avoid spreading.

I was weighing what now seemed a rather serious risk, but felt that’d I’d be too embarrassed to walk back out after having been noticed. But then, this did concern the health and possible life of myself and my daughter who would ultimately consume both drinks.

I asked in a friendly tone, “did you catch a bug?” She seemed a bit less cheerful than her usual self and my question seemed to make her uncomfortable. A regular employee, perhaps her son was doing his usual work in the back. A very cheerful man and we often exchanged “ni hao” and the Cantonese variant “néih hóu” as part of our increasingly friendly relationship as food maker and happy customer.

On rather heightened alert, I was watching very closely every step in the handling and preparation of the drinks I had ordered. I notice that she was moving brewed tea to smaller containers, and then I spotted the assistant making the other drink briefly touch the back of his neck before picking up the metal ice scoop used to shovel ice from maker to load a cup.

Now I was getting pretty creeped out. Whereas there were no obvious health code violations of any kind observed, I wasn’t really seeing any extra measures of caution in the preparation and the boba pearls and other drink toppers were in their regular tins behind the glass but otherwise exposed to the open air in the preparation environment (as one might expect.)

I certainly do not want to be unfair and sound alarm bells with any public statements about the specific place. But then, am I shirking a greater responsibility? Ultimately as the drinks were prepared I gave serious thought to walking out politely and then dropping both into a receptacle. Basically giving up a few bucks, avoiding making any uncomfortable scene, and quietly discarding what was beginning to seem a looming threat to the health of my family .

As I drove back I gave thought to another alternative. And once I arrived I explained what I was doing to my daughter before pouring the drinks into a pot to heat on the stove. After bringing it to a boil, I observed the tapioca balls remained intact as did the grass jelly.

I transferred that to a thick glass container to go into the fridge. And there it is presently cooling off. Ultimately I’ll add ice, sterilize the straws (by a quick dip in cheap vodka,) and serve up what I assume to be risk free boba tea!

And of course, whatever measure of caution taken, there’s always a risk of some other exposure, including the restaurant lunch I had earlier. The only thing I know for sure, is that restaurants, particularly Chinese owned will suffer, and I also know that the reluctance of customers to assume risks, the same ones that offered years of business to these nice restauranteurs are mostly the opposite of what we might be called by vile little racist creeps like Ocasio Cortez.