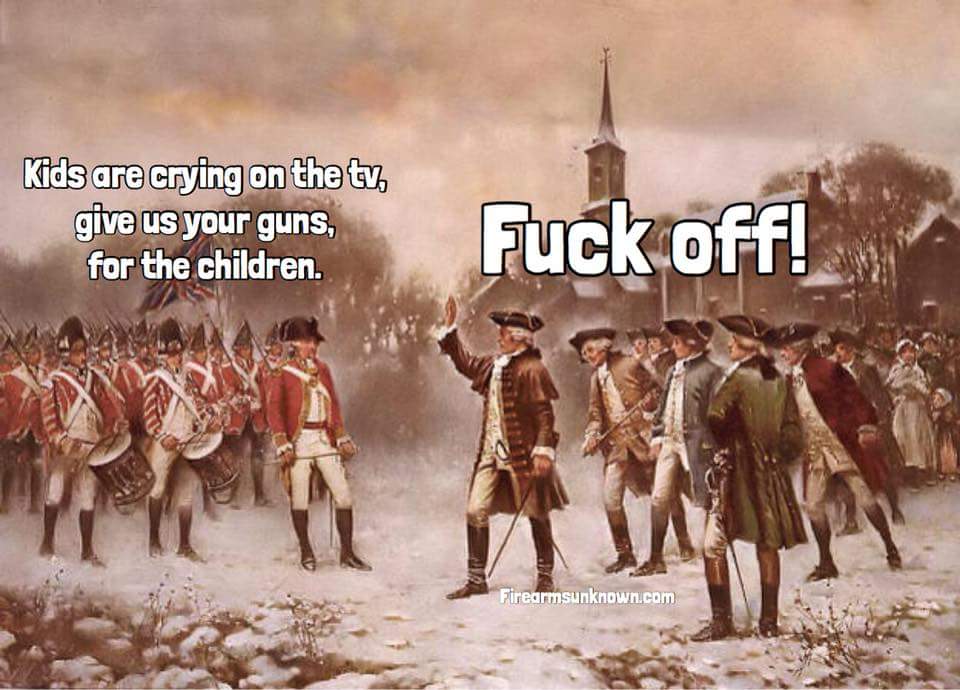 Phil Mudd hasn’t done much to help either the #DEMINFESTED FBI, nor even the CIA’s glowing reputation as an upstanding agency that reports with fidelity to our nation’s present Chief Law Enforcement and Intelligence Officer.

His faked crying performance did very little to allay concerns over the two agencies that performed with distinction in ignoring, enabling, or possibly even arranging the Parkland School Shooting that has accomplished so much for known CIA gun grabbing and domestic regime change agendas.

Just days prior to this amazing performance the same Phil Mudd threatened Trump that his apparent resolve to “take on” his dubious agency would be activate CIA “games” the President would be sure to lose.

Some Americans already knew the CIA wasn’t serving at the pleasure of the White House nor any other legitimate branch of the government elected by We the People.  And until recently, Democrats decried the outrageous and dubious practices of political assassinations, regime change plots, and other nefarious activities that most assumed were primarily focused on disruptions of foreign governments.

The eternally slimy career Senator Chuck Schumer perhaps makes the best case that the “intelligence community” does a lot more than just manipulate foreign elections and leaders with his amazing “six ways from Sunday,” comment shortly after Trump’s inauguration and on live T.V. with the left’s favorite conspiracy theories, Rachel Maddow.

Of course the lefties always rebranded most of these plots as “done by America” or “America’s government” rather than specifically crediting America’s own KGB that literally hired former SS agents at the close of World War 2, in what I’d describe as an interdepartmental job transfer.

Now of course Obama kept all these interconnected agencies LESS connected while he was potentially at risk of having his own nefarious objectives broadcast between agencies, but in his last days in office, he opened up all agencies to copy each others work for the purpose of carrying out his own backup plan for the unthinkable eventuality of Soros’ CFR-stooge pick Hillary not seeing what the same global operators had promised her when she stepped aside in 2008 for the first half of a sixteen year plan.

Moving fast forward, the Memo that very plainly exposed Obama, the Clintons, top Democrats and RINOs in an unthinkable conspiracy of treason, the Democrats and their DeepState #DEMINFESTED agencies were backed into a corner.

Fortunately for Democrats, all attention has immediately shifted to the vilifying of NRA and the must fundamental of American rights.  Complicit MSM immediately rushes to amplify a select few voices of inexperienced, thoroughly indoctrinated and coached that will take shout-down tactics and wild emotional arguments to a new fervor.  The few Republican politician that honor their own “Oath of Office” are asked “hard questions” about how they’ll refuse any future campaign contributions from the “evil” NRA that “kills children.”

In a masterful choreography, the Democrats remove all discussion of the revelations of the memo, and onto emotionally charged teens making “demands” that no school shooting ever happens again as they believe is made possible by the most extreme of gun grabbing measures that could only make Feinstein giggle with delight.

And so the women’s march gives way to school walkouts and children’s march while Florida legislature literally entertains new bills to permit 16 year old to vote!  This to leverage all that depth of all their grade school indoctrination and the heightened emotions that go with puberty to decide for the rest of us whether The Constitution and Bill of Rights is “a good idea” or not.

Now are we to believe this latest High School horror show as a happy accident to deliver Democrats and the nefarious agencies a dream come true?  I find it rather doubtful.

And so it’s starting to look like the another man with some intelligence experience may have been as right about School Shooting plots as he was about 9/11.

For those who don’t know about Bill Cooper, he was all shouting from rooftops that “something big” was about to happen and that it would be blamed on Osama Bin Ladin.  He followed that with an energetic plea: “Don’t you believe it!”

Later the same year he just happened to get killed in an altercation with police on his own property.  So needless to say, he’s not been able to offer much in the way of followup comments.

When we have another look at several recent shootings, it seems the FBI and/or CIA had been handed everything they needed to spoil the plots on a silver platter.

Now this leaves us to do some speculation about what’s really going on.  And of course if I had hard evidence to “prove” by courtroom standards the CIA was actively arranging school shootings and other domestic terror events, I’d not likely be alive and well to explore methods and well established agency motives in this writing.

We DO know FBI had been caught red handed attempting to recruit a “right wing terrorist.”

Obviously and in depth investigative journalism appears to lead to rather decisive consequences as Phil Mudd reminds us with his chilling words about the “games” played by the CIA (linked above.) 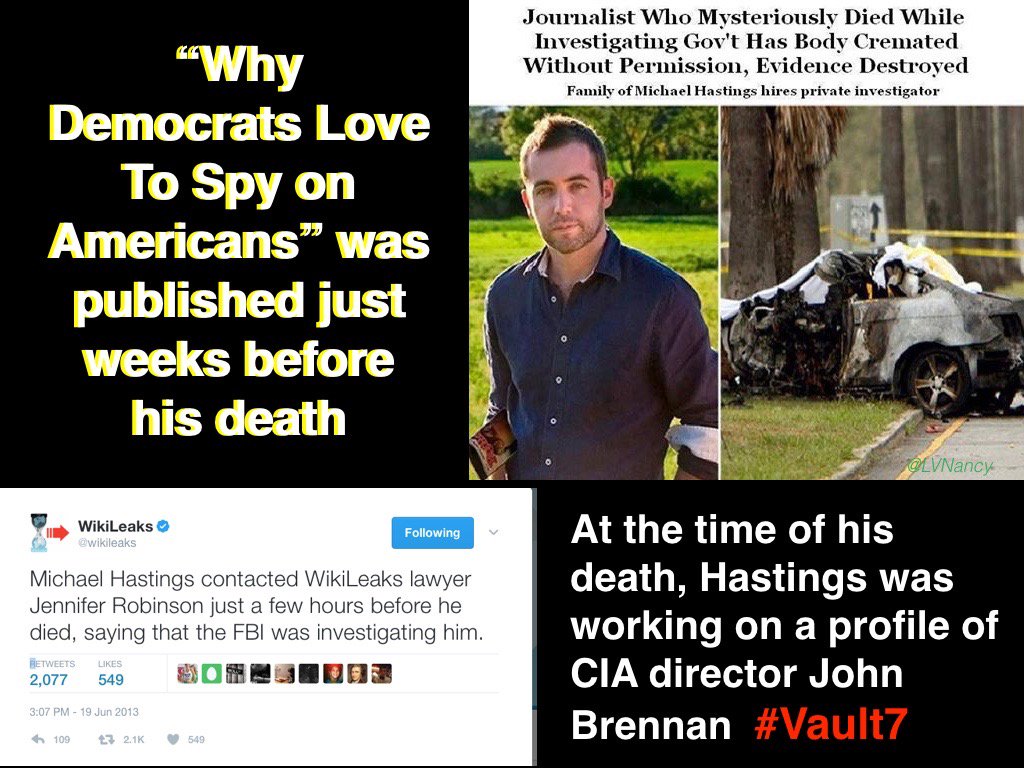 Whether a matter of gross incompetence, enabling or arranging by Democrat infested agencies, we do know that the recent couple of events have been effective.  We also know that FBI has literally been caught in at least one failed attempt to recruit a mentally disabled son as a “right wing terrorist.”

The Texas Church massacre was so emotionally destructive to the American psyche, that even a once staunchly conservative voice, Dr. Michael Savage, has now been flipped 180 degrees on gun control that he now advocates!

And this latest one must have been planned for some time to have the teen marches in full swing and an amazing well choreographed campaign that exploits emotional teens as the ultimate Useful Idiots in a militant hard left stance that can only be appeased by a complete and retroactive ban on “assault weapons” until the next event proves that even THAT was “not enough.”

Attempts to engage in reasoned arguments is futile, and most of these have never learned anything in their elementary schooling other than disdain for the 2nd Amendment and the basic human right of self defense it both acknowledged and specifically bars from any “infringement.”

Now certainly it can come across the wrong way to “attack” the poor emotionally wrecked teens that already suffered the loss of friends, and all the rest around the country that have been trained to fear the guns more than the unhinged lunatics either allowed to do their handy work by complacent agencies if not created by them. 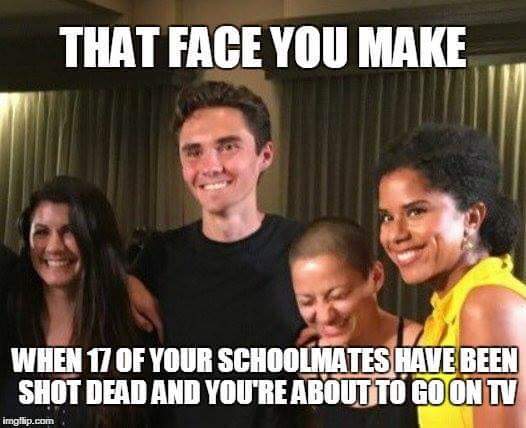 But there are some legitimate questions about the specific set of “voices” selected, primed, and clearly coached by the corporate media that’s run by the same elites who own the nefarious agencies that run independently from any legitimate US government controls.

I’m not sure if I’d count David Hogg as a “crisis actor” as many have suggested, and with disastrous consequences by #CIAGoogle’s YouTube censors, but his background does sure seem interesting even if we ignore his family connections to FBI and other nefarious anti-Trump personalities.   He also seems to need a lot of coaching for someone that otherwise seems comfortable making TV appearances across the country.

CNN and other media appear to be more interested in preserving a specific narrative than following up on leads suggest Nikolaus Cruz may have been acting in concert with other agents.

And of course, CNN has a zero tolerance policy when it comes to independent thought.

As do most organized criminal organizations, the CIA hasn’t been all that secretive about their anti-gun attitudes and policies.  We do know the CIA played a role in Jonestown and may have assisted in the cleanup of a few would be surviving witnesses to their experiment in group mind control.

We also know the CIA had a little something to do with arranging the rise of Pol Pot and all the gun grabbing followed promptly by mass murder when Americans were busy with disco dancing.

Iraqi civilians had enjoyed freedom to buy weapons before the US and CIA intervention.

And CIA began imposing gun control in Iraq before their proxy declared all privately held self defense measures “illegal.” 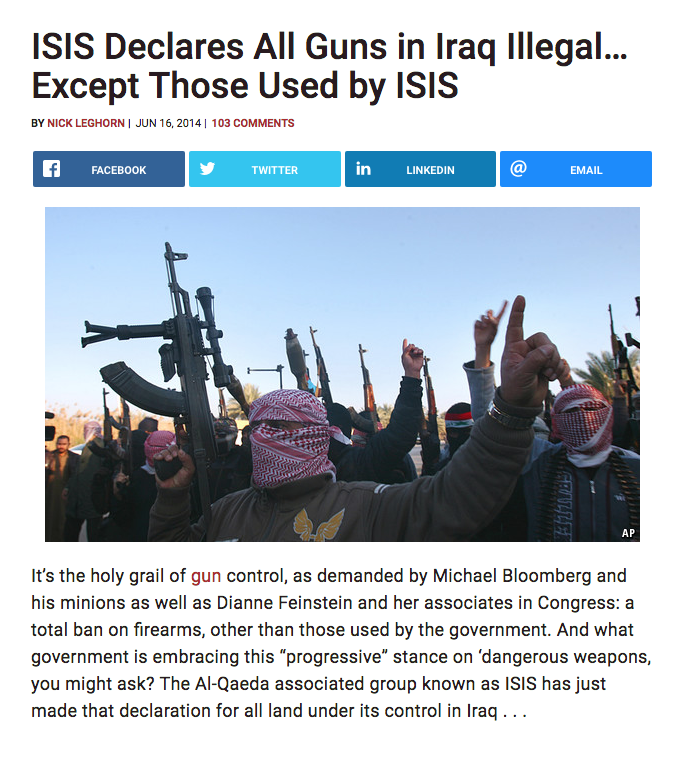 And of course the CIA gun grab sure paved the way for their proxy #ISIS to do their important work to meet globalist objectives.

CIA-GOOGLE’S YOUTUBE has stepped up efforts in #CENSORSHIP to maintain strict control over the message in the aftermath of the Parkland Shooting.  One channel offering content to question the narrative with 150,000 subscribers got taken down.  It won’t be a shock if the video and/or perhaps whole account of SGT goes down next. At the  time of this writing it’s still up:

Bonus content, there was INDEED an “active shooter drill” announced for the same exact day per David Hogg’s own video that’s posted on his OWN Youtube Channel.

^Youtube has been busy scrubbing a number of the videos presented in this article, inclusive of David Hogg’s own post that was previously featured directly above this text.

And since then, we’re discovering actual School Shooter Training Camps… and the complicit authorities sure seemed in a hurry to bulldoze the crime scene.

And it now seems that the CIA might do a whole lot more than just traffic drugs and arrange school shootings.

3 thoughts on “The CIA’s Game”