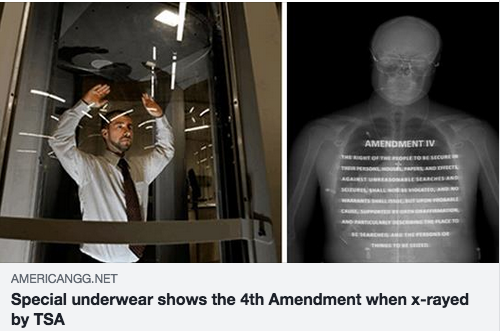 Cute underwear has been created to make the 4th Amendment text appear when walking into one of those TSA “Naked Scanners” as they’ve been called.  Still this mild form of protest against the Martial Law at all airport is ill advised since the minor prank requires an otherwise full exposure to a risk of radiation that, with the help of accomplices in media, is largely underestimated.

In addition to giving full naked image access of wives, daughters and grandmothers to the devil worshipers behind this latest New World Order scanning scheme, we are also accepting imposition of a possible death sentence for those frequent fliers who will suffer the worst of the health risks associated with these traps.

Now at the time of this writing, I’ve yet to ever step into one.  And I have every intention of opting out in exchange for the molestation option.  Still I believe that form of violation should, at the very least, be mitigated by allowing me to pick the gender of the assailant.  As a heterosexual man, I’d far prefer to be felt up by a young female agent, than offering myself to the delight of whichever sort of fellow might apply for the feel-up other dudes division of the TSA screening department.

In a day when even “assuming gender” can be counted a grave offense, the TSA should show more sensitivity than to presume a victim might somehow prefer such a moment of intimacy be conducted by a perpetrator of the same sex. Such an expression of indifference to a victim’s present feelings about their own gender identity and sexuality certainly should have no place in today’s “woke” society.

However serious the privacy and molestation issues may be, even the greatest exhibitionist should still avoid the TSA “Naked Scanner” at all costs.  The claims about the “levels of radiation” being “minimal” are extremely misleading.  This is partly because these scans concentrate the energy on the dermal layer, and once you factor that, comparisons to a more evenly dispersed exposure are dishonest.

And in a day when humanity appears to be suffering a veritable cancer epidemic, much better care should be taken to avoid unnecessary exposures.