Obviously they were too busy with the drill to attend to the drama that was unfolding that same morning.

Obviously FOIA has made public information that links Saudis and Wikileaks appears to have evidence connecting Clintons and Bush as complicit with Saudis as part of a larger plan to legislate against freedom and march ahead with the long planned “war against terror” which was meant to #REGIMECHANGE 7 countries in 5 years.

Perhaps this presentation can shed some light on the sleepy response from the US Air Force that would ordinarily be all over a jet that even slightly deviated from it’s registered flight plan.

It would seem that some people just can’t handle “the truther.”

The late Bill Cooper (author of Behold a Pale Horse) made these public statements prior to September 11.

He just happened to die from some minor altercation with police on his own property November 5th of that same year.

Nobody that was there believes that the fires that happened that day melted any steel:

It also appears that Hillary and Bush were complicit with Saudis on 911, and since Trump literally threatened to reopen the 911 investigation, one might certainly appreciate why Bush was literally #WITHHER in this past election.

The following Corbert Report explores extremely suspicious financial dealings as they pertain to 9/11.

Join the fun in a related conversation on our FB!

Finally… after nearly two decades, a grand jury is to be empaneled to see some justice done.  SGT Reports…

While there’s been recent controversy surrounding Trump’s early actions to disinfect a severely compromised EPA, very few are familiar with just what happened to and with the EPA in 2009 under Obama’s direction.

The above conversation includes 2nd hand accounts of the veritable raid conducted by Obama to purge all the good scientists and any Christians, and replacement of scientific testing in favor of computer-model based garbage in-garbage-science-out standards.

The EPA already had a rather abysmal record.

END_OF_DOCUMENT_TOKEN_TO_BE_REPLACED

This man needs some help.

Obviously Canada has some serious issues.

And the inane Trudeau is now pressing to criminalize criticism of Islam!

END_OF_DOCUMENT_TOKEN_TO_BE_REPLACED

A quick timeline summation has been making the rounds on FaceBook which reads:

END_OF_DOCUMENT_TOKEN_TO_BE_REPLACED

A 2014 documentary sheds light on the NWO agenda and how Putin has become a traitor to the Global Cabal.  We queued it up to the most relevant part that begins with Putin’s defiant turn against the NWO plot.

Putin and Russia are now our ally in the fight against Obama, McCain and Hillary’s ISIS.  But while tots are raped, men and women are burned alive in cages, and beheadings continue, all #MEDIAJIHAD attention has American eyes on Russia!

END_OF_DOCUMENT_TOKEN_TO_BE_REPLACED

Vaccination has become a conversational hot potato.  Friendships can be called to question in a matter of seconds for the mere hint of second guessing any of the the choices made by society, bureaucrats or medical professionals.  Suggest that an adult or responsible guardian might have a final say, and you’ve just committed outright heresy against the entire establishment.

Whether we’re talking about especially unqualified bureaucrats wielding authority over a veterinarian,

we have to acknowledge that there’s more to the quality, quantity, frequency and range of vaccinations and the potential harm that comes from hitting the wrong number on any of these measures, than what can be settled with simple marketing terms like “safe and effective.”

This is presently the best available documentary on vaccination.

On the importance of Informed Consent:

By now we’ve all seen these inane MEMEs deployed by Marxists to justify lawlessness and open borders as their version of “immigration policy!” 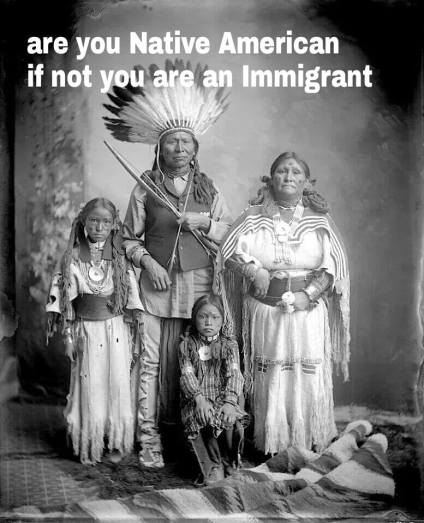 Obviously honest discussion isn’t the goal of Marxist Activists and so law abiders of any race or origin that oppose unstructured immigration by invasion are branded “anti-immigrant.”

And of course, in turn, anti-immigrant requires some mental illness that the Cultural Marxists are all trained to diagnose as “xenophobia.”

END_OF_DOCUMENT_TOKEN_TO_BE_REPLACED

To this day liberals are still heralding the challenges to Obama’s eligibility as “debunked” and “racist” “lies” directed only by “conservatives” as an unseemly attack on his proud half-Kenyan heritage.

Trump has been specifically targeted by liberal twits at #FAKENEWS operations like Huffington Post as “racist” for his role in the American process of discovery on this important question.

END_OF_DOCUMENT_TOKEN_TO_BE_REPLACED

The lib twit run Huffington Post took one last desperate swing before the American People made their choice a few weeks later in this inane article smearing Trump as “a racist” while enumerating 13 “examples’ as “proof!

Their latest expression of #MEDIAJIHAD against Trump enumerated all the “examples” of Trump’s “racism.”  Let’s review their big indictments one by one.

END_OF_DOCUMENT_TOKEN_TO_BE_REPLACED

Another #LIBTWIT on Twitter posted this inane MEME as the usual sort of argument substitute deployed by the segment that thinks #SUFFRAGE was earned only to have estrogen and emotion determine elections.

It was such a fantastic and comprehensive MEME that it almost made her a better Democrat doctrinaire for having shared it.

Of course I felt it deserved answer, and it would be impossible to do it justice within the few words of a TWEET.

So here’s my answer…

You’re #WITHHER because nothing says #RESPECTFORWOMEN more than slut shaming a 12 yr old after she awoke permanently disabled from her #RAPECOMA, to win a case!

…and no.  The #LIBTARD spin site posing as “fact checker” has not debunked the facts of Hillary’s involvement and unethical conduct in that case.