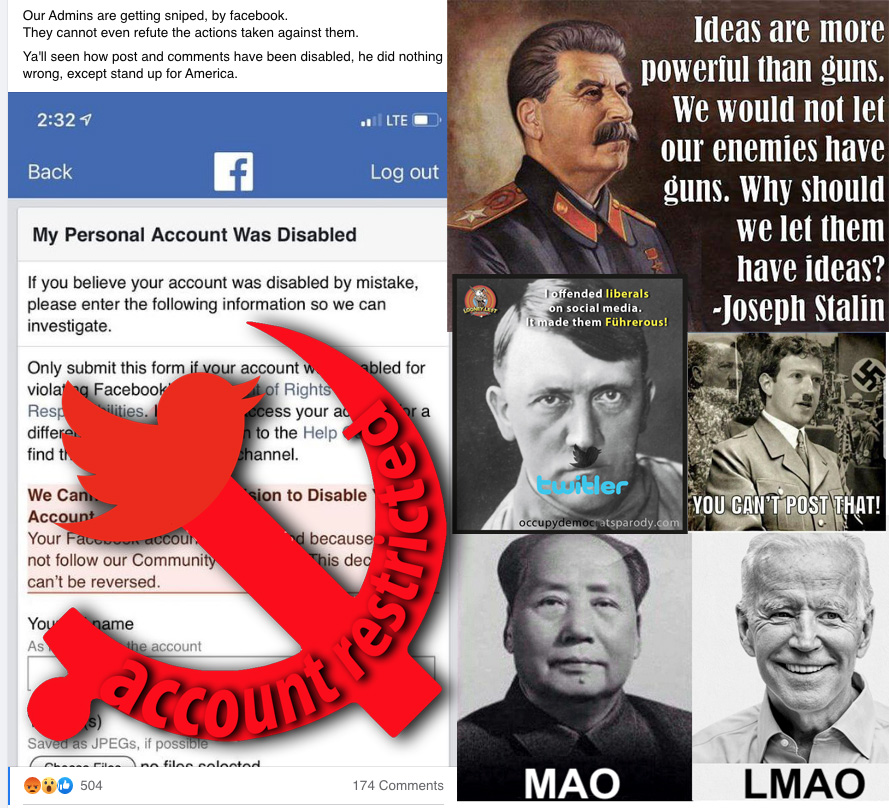 Users are now treated to a warning on any attempts to use the share feature on content posted on “League of Men Voters” page.

Meanwhile, here are the real facts:

END_OF_DOCUMENT_TOKEN_TO_BE_REPLACED

Many have long been “jesting” that “truth is a violation of Facebook’s Terms of Service.” Like most observations about the behaviors of the left, whatever might be dismissed as a satirical or exaggerated claims today, will soon be proven a dispassionate statement of fact.

END_OF_DOCUMENT_TOKEN_TO_BE_REPLACED

After a long history of racketeering, targeted harassment, denial of service, and wild violations in privacy and 1st Amendment protections, the Social Media Taliban has taken their anti-American activities to a new level. The coordinated efforts by the likes of Jack, to intercept communications from the President of the Unites States fully meets the definition of treason.

END_OF_DOCUMENT_TOKEN_TO_BE_REPLACED 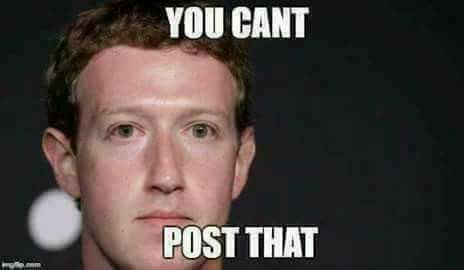 Apparently Zuckerberg is as much of a super authority over all doctors as Bill Gates!
©2020 WarOnPress

A pattern of abuse by the vile thought police at Facebook has resulted in several time-outs! And during the imposed “social distancing” most are enduring today, imposing a suspension of connecting to friends on social media that prohibits even personal messaging*, is particularly cruel and irresponsible.

I personally used, celebrated and promoted Facebook since I made the trade of personal information for what was promised to be a “better internet” in 2007. I encountered zero problems with the platform from then and through most of 2016. So a perfectly great experience for a full decade. And then, immediately after an election went the “wrong way,” the campaign of targeted harassment began.

At first, a 24 hour suspension over some minor business that I’ve frankly forgotten. Then 72 hours. Then a week. And subsequently over a full year of suspension of the three years that followed. Most over comments or memes that only a lunatic could construe as “violation” of anything.

The details for each installment in a campaign of harassment by Facebook are presented here in reverse chronological order.

After enjoying most of a recent trip to Central Europe with access to FB, I managed to preserve my use up until a fateful posting of a meme featuring Eric Swalwell. The meme featured an image of a woman sitting down across from Swalwell expressing concern for his gun grabber threats. His answer to, “you know I’m a gun owner,” was “you know we have nukes, right!” was a rather precise representation of his actual words. So somehow, this meme was characterized as some “incitement” or “threat of violence.” If that’s how they grade Swalwell’s own statement simply being called out by the meme, should the corrupt Congressman be the one put in jail for it?

END_OF_DOCUMENT_TOKEN_TO_BE_REPLACED

Our primary page admin has been blocked from fulfilling the important duties and responsibilities associated with managing a 31,000 plus like Facebook page.  Apparently a dated post from sometime last year caught the attention of an easily triggered SJW on Zucker’s staff.

The current sentence is 7 days where even basic “like” and messenger features are summarily disabled.  FB will not take phone calls so a visit to the Menlo Park facility may be required in hopes of finding out precisely how a perfectly polite post crossed “funny” into “violation” by whatever narrow margin.

END_OF_DOCUMENT_TOKEN_TO_BE_REPLACED

Today I’m barred from responding to posts or otherwise participating on FB on ANY account.  This includes Occupy Democrats Parody.

Apparently they didn’t like it when I dared to respond to a post about the ironically named #ANTIFA that Zuckerberg likes to coddle.   It seems describing them with the acronym for “Fascist American Gay Soldiers” touched a raw nerve.

I’ll have much more to say here and on FB once the 72 hour sentence has been faithfully served.  That’s when our #FREEEDUCATION will resume.  Meanwhile you can follow us here and on Twitter.

Suddenly I noticed dialogs popping asking for FB login credentials.  Assuming my page was hacked or I was otherwise logged off, I returned to my open FB browser tab to find a big message informing me of some post that was removed and a punitive blocking from posting on ANY PAGE for a period of 24 hours.